It's "Earth Day" Don't throw away your "butts"

Another Earth Day is almost over. What it means to me is more awareness besides action. I noticed today two separate incidents of people throwing their cigarettes out their car windows. Ouch!

First, let me tell you, I'm not being self-righteous. I smoked for years; tried to quit also for years. How I finally kicked the habit (I had become a closet smoker); no, it was not will power or ability. It was bacteria pneumonia and a two day stay in the hospital coughing up blood by the cupful that pervaded me. As I told my daugther "It had never been explained so well before".

But when I did smoke, I never litered. (There's a little good in all of us.) 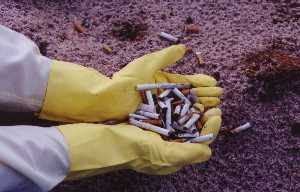 So, on to my next point. If you must smoke (I understand) don't litter with your butts. It's bad, bad, bad for the environment.
Fact:

"[Cigarette butts] also present a threat to wildlife. Cigarette filters have been found in the stomachs of fish, birds, whales and other marine creatures who mistake them for food ... Composed of cellulose acetate, a form of plastic, cigarette butts can persist in the environment as long as other forms of plastic."

Do us all a favor. Don't throw it out the window.

A gift: The capacity to love. 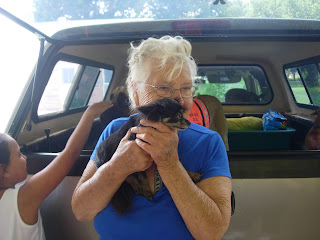 A few years ago, I read a wonderful little book: "Man's Search for Meaning" by Viktor E. Frankl. He and his wife were Jews sent to separate camps during the horrible Third Reich's terror of WWII. He did not know if his wife was dead or alive (she was murdered). He realized one day in his misery and suffering, it did not matter. What matter was he had known love. What a gift!!! I still draw from that passage to help me appreciate the things that truly matter in my life; the capacity to love.
You're looking at the picture above of my mother-in-law, Shirley. I really should say my "other" mother and a true friend. Shirley had colon cancer surgery over 1 1/2 years ago. It was recommended chemo at that time; but she refused; saying she'll take her chances. Well, it returned - lungs, liver and bones. With treatment; 2 years. Shirley's response: "O.K., I was wrong. Let's do it your way." Treatment starts Monday.
Between Shirley and me, we decided the 2 years given her wasn't enough; "Let's go for 5". Her four daughters don't live close, but they are a loving family. They keep thanking me over and over for being there and for my hardship in caring for Shirley.
Here's the payoff. I'm the lucky one because I am close by and I have received the capacity to love. There's no inconvience. I'm the one that gets to spend time with the one I love.
We're planning now on how to spend this time. So, instead of saying "We should" we are saying "Let's go".
Posted by Rubi J at 8:01 PM 1 comment: 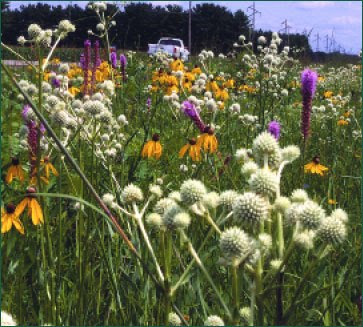 I totally love this picture of an Iowa roadside. What mades it special for me is the wildflowers with the pickup in the back ground. It doesn't get more earthy and organic for an Iowan gal like me.
April 22, 2010, is the 40th anniversity of national Earth Day. Let's make a difference. Let's leave all the politics behind us; and the science, whichever side you are on. Let's just give graditude for the spirtuality that this world has given us. Let's give back.
What I'm proposing on this day is not earth shattering; just join my little "club".
Mark the 22nd of this month to pick up one piece of litter and dispose. How simple!!!!
Pass it on. There's 300 million of us in the U.S.
We could be the start of something big.
Posted by Rubi J at 9:05 PM 1 comment:

We all need a vision.

This last week has been so inspiring.

Tuesday night I spent an "Evening with Deepak Chopra" at the Qwest Center in Omaha. His book "The Seven Spiritual Laws of Success" has been by my side for several years. I reread it whenever I need to get my life back to balance. I give it away to all my friends. It was a wonderful night.

The next day was awesome. I went to the ICAN Leadership Conference; again at the Qwest Center. A day of fellowship, inspiration, motivation and networking for women. The speakers were amazing, the vendors interesting and the food plentiful. I came away refreshed, renewed and rewarded.

But, what stayed with me the most was the new friend I met during the lunch.

I sat down at the round table for eight, sitting beside a new person from the morning session. I introduced myself and she did also. (This is what we do at conferences.) Her name is Beth Katz and I want everyone to meet and know her. This lovely young lady is a jewel.

We all should have visions. My vision to keep pecticides out of children's lifes. Her vision: (my words, not hers) "harmony in the world". Beth is the executive director and founder of Project Infaith. Their mission statement:

"Project Interfaith grows understanding, respect and relationships among people of all faiths, beliefs, and cultures."

How refreshing. Instead of barbs, ridicule and mistrust; compassion and the want to understand.

Want to be a better person?