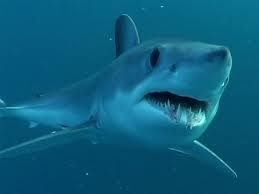 ﻿Sure; not the prettiest face in the animal kingdom, but they are cool.
The Mako Shark is one of the featured wildlife species in Animal Tails product line. This shark is the fastest of all and came jump out of the water up to 20 feet. Cool.
Another interesting fact: They apparently taste good; the main reason the Mako Shark is now endangered. They have been overfished. Their fins are a delicacy. You've heard of "shark fin soup". There has even been reports of fisherman, after catching a Mako Shark, cutting the fins off and throwing it back in the ocean to die. That was hard for me to take; needless suffering.
Animal Tails has two different designs for the Mako Shark. Here they are on the baby items:
Sweet and cuddly for your baby boy. 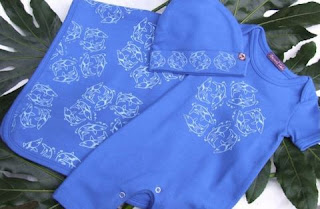 But as our boys get older, they want cool, not sweet and cuddly. That's why sharks are cool. There wouldn't be much drama in West Side Story if the "Jets" (instead of fighting the "Sharks") were going to rumble with the "Tuna's"or "Guppies". Just doesn't work. And how about the many cool characters you have seen on the big and little screen named "Sharkie" or "Al, the Shark". If you lived in a tough neighborhood, what would you whether to be called: "Shark" or "Fishhead"?
I rest my case. Sharks are cool.
The boys short-sleeved Mako Shark is our current "Special of the Day". For a limited time only, it's half off of retail. Check it out at http://www.rubij.com/.
I love this shade of blue. That's another thing you'll discovered with these organic clothes. The colors stay washing after washing.
Posted by Rubi J at 2:38 PM

I love these shirts and so does Cole - they great thing is how well they wear. What an awesome special and I love the baby set!

The turtle shirts arrived today, that I won in the August drawing - much appreciated! I was slow to get my request in, from being under the weather, but once I could, they arrived quickly - thank you! They will make some lovely holiday gifts. :)

So happy you like them. They'll be great gifts.