Don't we love our four legged companions and confidants? We lucky people that have looked into the eyes of this other species and felt a connection are privileged and graced.

Having said that; I want to tell you about one woman making a difference. My new friend, Cea, (one, like me, believe dogs have souls) told me about her friend, Starline Nunley. Starline's son was serving in Iraq and, of course, like all mothers ask what she could do to help him in his mission. He told her the government supplied him with everything to assure his safety, but apparently had forgotten about their most faithful soldiers. The temperatures are so hot in Iraq and the dogs have no protection from the heat. These wonderful dogs are the first line of defense in searching for IED (Improvised Explosive Devices).

Being a dog lover, Starline got to work. She started the http://www.supportmilitaryworkingdogs.org/.  This charity provides cooling vests, pads for their feet, water bowls and one toy for their "down time". Learn more about this organization at their website.

My dogs Clifford and Lucy. 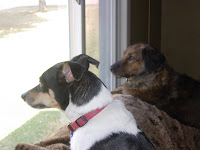 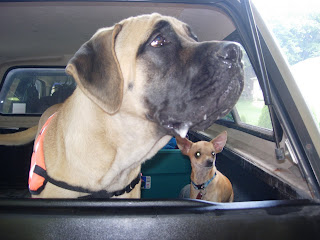 This Miracle and Flash. Flash is the little one. She's my sister-in-law, Angie's dog. Miracle is Angie's partner, Mary's dog. They are the best of buddies.

Mommyhood: On Hamsters
Posted by Rubi J at 7:24 PM No comments:

What's in a name? 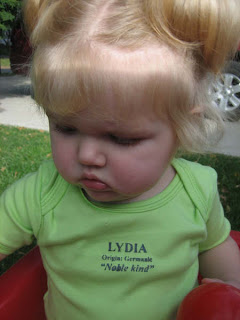 In the early 90’s, my husband and I traveled to Israel, where I met a lovely lady name Lira. We were exchanging information about our family when she asked “and what does your daughter’s name mean?” I told I really didn’t know, I had never really thought about it. She was aghast. In her culture, great care is given to name a new baby. The name’s meaning is most important as it will become part of who this person will become.
Huh, I just thought “Stefanie” was cute.
Since then, however, I have been interested in the meanings of names. One of ideas for screen printing at Rubi J’s has been suggesting instead of just the name printed on an onesie or t-shirt; also put the origin and the meaning. That’s now our most popular screen printing we do for baby gifts.
I’ve had more common names like:
MICHAEL
Origin: Hebrew
“Who is like God”

Or an unusual name like:
SHAYNAH
Origin: Yiddish
“Beautiful”

I’ve had one grandmother order 8 t-shirts in different colors with the same name/meaning on it for her first grandchild. (We grandparents are like that.)

I do my research and then have it preapproved before making the print. There has only been one time it wasn’t accepted. My friend wanted this done for her little grandnephew’s first birthday. The only meaning I could find for Brock was “Badger”. The aunt didn’t want the mother to think she thought little Brock looked like a badger; and since the parents didn’t attend the University of Wisconsin, we drop the name/meaning thing and went with the look of a football jersey.

One of the prettiest ones I did was:
MARISA
Origin: Latin
“Of the sea”
Doesn’t the name Marisa flow like water? Perfect.

By the way, the name Stefanie means “crowned one”. Very appropriate.
Posted by Rubi J at 3:54 PM No comments: 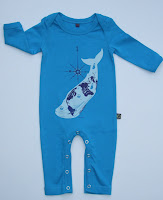 Animal Tails is a line of organic infants' and children's clothes Rubi J is extremely proud to offer in the States. Manufactured in Great Britain, Rubi J is one of only two outlets in the U.S. Their line is certified GOTS organic cotton like all our products. But it's a lot more. Their rompers and tees have beautiful original artwork of endangered species. Each garment comes with a hang tag from the animal depicted explaining their plight. Here's the tag for the blue whale:

"I am the largest animal in the world ever to have existed! I weigh about 200 tons; have a heart the size of Volkswagen Beetle, and a human child could crawl through my main artery.

I would be great to hire for large parties as I could inflate about 2000 balloons in one breath. But my appetite is hard to satisfy as I eat 3,600 kg of krill a day.

Sadly there are only about 15,000 of us left due to hunting and climate change affecting our food supplies. Thank goodness for the 1960s, that's when hunting was banned, we were on the verge of extinction. But dating can be tough with so few of us left. Our mating sounds can be heard for 100's of miles. Unfortunately increases in ocean noise due to shipping and seismic surveys conducted by the oil industry are reducing the distances at which they can be heard."

Hopefully, this will inspire your children to research the blue whale and learn about how magnifient this animal that share our universe is. 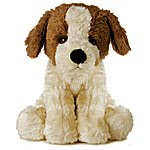 Remember the holiday shopping season last year? I remember it as the "year of the toy recalls". Didn't it seem like every day the news had a new recall to report? Becoming more aware of our littliest citizens' health and future, I think toys should be high of the list of safety.
I first went to the government's sites regarding toy safety. I was sure to find all the answers. A few hours later, the only thing I knew for sure was my neck hurt. Don't get me wrong; there are tons of useful information, like looking up a toy to see if it's been recalled. You might think all recalled toys are off the shelves. That's not always true. Do your homework.
But I'm looking for toys to recommend. So, I researched manufacturers and companies. Here are my top five:

We’ve all seen civil and criminal trials on TV, whether fictional or real. Each opposing team will call their expert witnesses. These witnesses are no “men/women off the street”. They are highly qualified individuals with a zillion letters after their names. Yet, given the same data, they arrive at totally different conclusions. Who are we suppose to believe?

So, in our daily lives, who do we believe what is safe or harmful?

I decided to do a little research of my own on the safety of Bisphenol A, otherwise known as BPA. I’ve been reading reports all week. BPA is either totally, totally safe or one drop will turn your child into a mutant. Clear on that? OK, let’s get in a little deeper.

BPA is an endocrine-disrupting chemical produced in large quantities in our society. It’s used in the production of polycarbonate plastics and epoxy resins. The polycarbonate plastics are used in food packaging, water and infant bottles and medical devices among other products. Containers will usually have the symbol “7” or “PC” on it. The epoxy resins are used to coat metal products like food cans. It’s the use in baby bottles that has created the most controversy.

In my quest for answers, I first researched where and who any report was generated. Once this is known, it’s fairly simple to guess what conclusions will be reached.

The report I found to have the least bias was issued by the National Toxicology Program, a division of the National Institute of Health. The website for this and other reports is http://www.niehs.nih.gov/news/media/questions/sya-bpa.cfm.
In short, they found Some Concern for effects on the brain, behavior and prostate gland in fetuses, infant and children at current human exposures to BPA. On a scale on 1 to 5, Some Concern is a 3.

So, read the report and make you own decisions. My thoughts. When it comes to our children, some concern is enough. It’s also enough for some manufacturers. We are starting to see labels stating “BPA-Free”.

This is what I love about living in this society of ours. We always have the right to question.
Posted by Rubi J at 10:57 AM 1 comment: