Animal Tails has introduced 5 new endangered species to their line of organic clothing. I always like to research each wildlife a little further. The large blue butterfly has an interesting story.

Its habitat is across Europe, but was declared extinct in England in the 1970's. Scientists at first thought it was because of butterfly collectors. But then (this is the interesting part) Professor Jeremy Thomas made an unusal discovery. The large blue can only survive if there is a certain species of red ants living in the habitat. Who would have thought? Obviously, Professor Thomas is smarter than most of us.

When in the caterpillar stage, it hatches on thyme buds. The ants then carries it back to their nest and there it feeds on ant grubs until it becomes a beautiful butterfly. Climate change in England made the ants go away, thence also the large blue butterfly.

Now to the happy ending. Habitats were restored on 50 former sites to bring back the ants. Then the butterflies were brought in from Sweden. Success!!!

There is still lots of work to be done; but isn't it a thrill that we can reverse the damage done.

The Large Blue Butterfly is featured on Animal Tails' girls t-shirts, rompers, hats and blankets. See them all at http://www.rubij.com/ 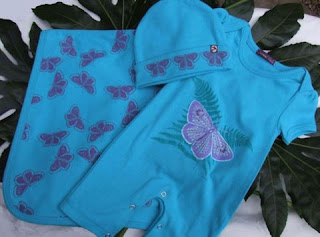 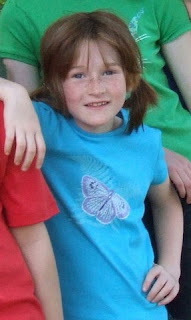 If only I were a little smaller!